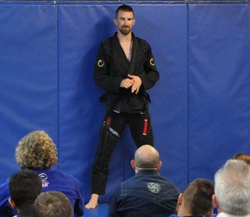 Professor Dillon Gower
Dillon began his martial arts journey where many others do, Tae Kwon Do as a child. After a short hiatus, in 2006 he began training in Genbukan Ninpo Taijutsu (a form of Japanese Jiujutsu) and Judo in Virginia and Maryland. In July 2008, he moved to Orlando to train at American Top Team and to live the life of a humble martial artist to the fullest. Since then he has competed in BJJ, Muay Thai, and MMA.  He was promoted to a Black Belt in Brazilian Jiu-Jitsu by Paul Rodriguez in 2016.

"While it may not be easy, it is extremely rewarding and I am determined to live and teach others to live the way of the warrior for the rest of my life. See you on the mats. Osu!” 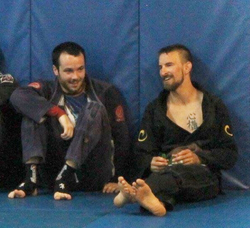 Derek Hudiburg
Derek started his martial arts adventure at the young age of 13 when given the option of taking a remedial English class or to join the wrestling team. In 2012, Derek began training Jiu Jitsu under Dillon Gower and is currently a purple  belt.  He has won and/or placed in multiple grappling tournaments, with the hopes of adding more wins to his resume in the coming years.